What is a PIR Sensor?

What is a PIR Sensor?

PIR sensors are favoured for their sensitivity and reliability, and are used in a range of commercial and domestic burglar alarm systems across the world. To find out how they work and how you can get your hands on one, take a look at this months’ article. 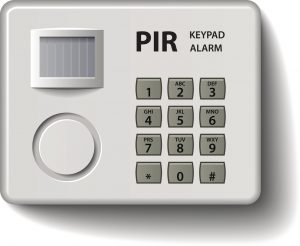 How does a PIR sensor work?

A PIR motion sensor measures a change in IR (infrared radiation) to detect movement. Don’t worry when you hear the word ‘radiation’ — every human and animal emits a low level of radiation in the form of heat. Essentially, anything with a temperature will emit infrared radiation and the higher the temperature, the more radiation there is emitted.

PIR sensors can detect a sudden IR spike in their field of view. This typically occurs when a person or animal enters the field of view, as they will be emitting a greater amount of IR than any inanimate objects in the background.

However, PIR sensors aren’t just used to detect changes in ambient IR — they need to detect movement. To do this, the lens must not only detect an increase in IR in its field of view, but it must also detect a transfer of IR from point A to point B. And it does this in a very clever way.

Once movement has been detected by the sensor, It notifies the home security panel and an alarm is sounded.

It is important to note that PIR sensors won’t detect small fluctuations in IR, so they won’t trigger the alarm if your pet walks by.

What PIR sensor products are there?

PIR alarm sensors are used in a wide variety of products from many of the top security brands. Many of these products are suited to different needs. You might require:

To get the best protection for your home or business, it’s important to choose the right product for your needs. That’s where we come in.

A.T. Alarms is a leading provider of security services to Nottingham and the East Midlands. We supply burglar alarms and a range of other security equipment from the world’s most trusted manufacturers. Trust in A.T. Alarms and we will help you find the perfect security solutions for your home or business. And we’ll not only help you find it, but we’ll install and service it, too. We provide full support from start to finish — that includes a site visit, product selection, installation and years of aftercare service.

For the best home security or business security, choose A.T. Alarms. Contact our team today for your free quote.